Affiliate Disclosure: As an Amazon Associate we earn from qualifying purchases.

Many people swear by weighted blankets, as an aid to both sleep and anxiety.

The accepted ‘science’ behind how weighted blankets work is something called deep touch pressure (DTP). DTP is where gentle pressure is applied to the body – through methods such as holding, stroking, hugging, swaddling or squeezing. This gentle pressure naturally encourages the brain to release the hormone serotonin.

Children and adults with disorders such as autism, depression, insomnia anxiety or ADHD are often low in serotonin, so using a weighted blanket may encourage the brain to produce more serotonin to help improve relaxation and sleep.

Want to know more about DTP? This article uncovers some of the increasing body of research into deep pressure stimulation and touch therapy.

What Do Weighted Blanket Studies Say?

Whilst a great deal of anecdotal evidence exists on the positive effects of deep touch pressure stimulation and weighted blankets, empirical evidence is still quite limited.

Below you’ll find scientific studies that do exist and what they say for sleep, anxiety and autism and ADHD.

This study from 2015 found a weighted blanket had a ‘positive impact on sleep’, providing study participants with a ‘more comfortable, better quality, and more secure sleep.’ 21/31 of the participants, with insomnia, fall asleep faster.

An extract from the study, concluded that:

‘…a weighted blanket may aid in reducing insomnia through increased tactile and proprioceptive inputs, may provide an innovative, non- pharmacological approach and complementary tool to improve sleep quality.’

Additionally, this 2011 Nordic study concluded that weighted blankets had a positive effect on sleep issues, helping participants with ADHD to fall asleep quicker.

Research by noted scientist, Temple Grandin, also highlighted how heavy blankets may aid sleep, with a ‘high functioning autistic woman’ stating, ‘I need heavy blankets on me to sleep well, or else my muscles won’t calm down.’

This pilot study from 2015 investigated the safety and effectiveness of the standardized use of a 30-pound weighted blanket with 30 adults, during an acute inpatient mental health hospitalization. Via a State Trait Anxiety Inventory and patient self-rating anxiety scale, the study indicated that ‘60% had a significant reduction in anxiety’ using the weighted blanket.

Again, with anxiety in mind, this study examined the effect of sensory rooms in an acute inpatient psychiatric unit. It discovered that when participants used a sensory room, there was a marked reduction in stress, as well as an improvement in a range of disturbed behaviours. Results showed that:

‘Those individuals who used the weighted blanket reported significantly greater reductions in distress and clinician-rated anxiety than those who did not.’

The report also concluded that, with regards to stress reduction, ‘weighted blankets appear to be particularly useful.’

Lastly, this research study from 2008 found that weighted blankets reduced anxiety in participant patients, revealing that: ‘63% reported lower anxiety after use, and 78% preferred the weighted blanket as a calming modality’.

Some of the earliest research on DTP and the benefits of ‘heavier’ blankets was produced by noted animal scientist, Temple Grandin.

Herself on the autistic spectrum, Temple was one of the first to publicly share personal insights from her own experience of autism. These insights led her to invent the ‘squeeze’ or ‘hug box‘, a device which exerted deep touch pressure on its users.

Weighted blankets have a long history in the autism community and Temple Grandin’s ‘Hug-Box’ was essentially a precursor to the modern day weighted blanket. A study of the box discovered that DTP benefitted children with autism and ADHD, helping to calm and reduce stimulating behaviours.

Temple’s study also reported how heavy blankets benefited an autistic woman, helping her to sleep and calm her muscles. Grandin herself, also noted how she would get under the sofa cushions and have her sister sit on them, in a bid to get the pressure stimulation she craved.

This was backed up by this 2011 Nordic study, which concluded that weighted ball blankets did have benefits for sleep issues related to ADHD. It found that:

‘…use of Ball Blankets for 14-days improves the time it takes to fall asleep, individual day-to-day variation and the number of awakenings to a level that compares with those found in the healthy control group.’

Ball blankets are similar to weighted blankets in that they contain plastic balls for changing sensory stimulation.

However, this more recent 2014 study concluded that a weighted blanket did not help children with ASD sleep for a longer period of time, fall asleep significantly faster, or wake less often. It did conclude though, that the use of a weighted blanket was favoured by both children and parents.

Here’s a summary of the key research findings on weighted vests:

This 2015 study discovered that weighted vests decreased stress and helped promote a sense of calm. A quarter of the research participants were being treated for anxiety, depression or ADHD.

A further 2011 study followed 30 students, with ADHD, who demonstrated significant improvement in a number of areas when wearing a weighted vest. Improvements included task completion speed and task focus.

An earlier study, in 2001, found that students who wore a weighted vest increased their focus by up to 18%. Although the study was a small one, (4 participants), 3 of the 4 students often asked to wear the vest outside of the research trials.

In contrast, this study indicated that weighted vests were not effective at increasing on time tasks. The study sample size was again a small one, it was concluded that results should be generalised ‘cautiously’.

Are There Any Weighted Blanket Risks?

However, weighted blankets should never be used with a baby, or child under 2, as it may increase suffocation risks. Weighted blankets are also not recommended for children still exploring objects with their mouth or who have severe developmental disabilities or delays. To be safe, it’s recommended you consult a doctor before using a weighted blanket with a child.

Weighted blankets may also be unsuitable for people with conditions such as:

Always use common sense when using a weighted blanket and if unsure, consult medical professional for advice.

A growing body of research suggests deep touch pressure stimulation (DTP) may positively effect a range of conditions – from sleeping issues and anxiety to autism and ADHD.

However, whether or not the science is yet conclusive, weighted blankets are extremely popular with many people, due to the cozy ‘hug’ like comfort they provide.

Previous Post: « 3 Best Weighted Lap Animals To Help Sensory Kids Calm Down
Next Post: 10 Weighted Blanket Guidelines For People About To Buy One » 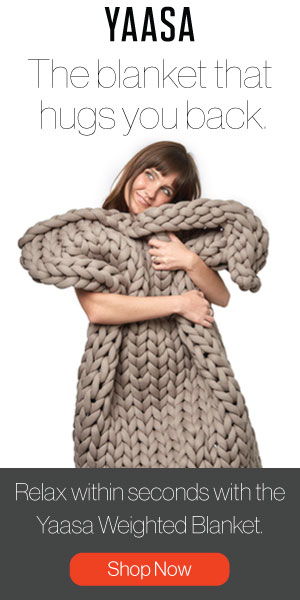